Water, Not Soda, Might be What Would be Running Through Liquid Fillers in the Future

Partly due to the growing prevalence of obesity in the country, Americans now seem to prefer bottled water over soda as their standard thirst-quencher. An article in the Bradenton Herald reports that the amount of soda being consumed in the United States today dropped by 17 percent, while bottled water consumption rose by 38 percent. These changing habits were also a result of recent legislations that ban the sale of soda and other sweet drinks in bars and restaurants in some places, such as New York City. 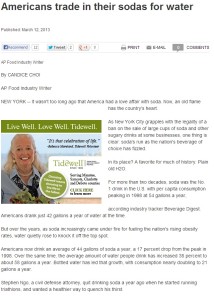 If the demand for soda continues to plummet in the future, then good old fashioned drinking water in a can or a bottle might be what’s pouring from liquid fillers around the country soon. Optimistically, the transition from soda to water wouldn’t have a huge impact on production numbers since filling machines, like those made by Filling Equipment Co., Inc. are suited for most liquids. However, it can be expected that this change would not be as seamless as one might hope.

An obstacle to these efforts is the existing call to ban the sale of bottled water in some parts of the country, like in Concord, Massachusetts. Some activists argue that since water is a public resource (therefore, free), it is unlawful to have it marketed and sold for a price. A few of them even claim that half of this drinking water comes from the tap anyway. Additionally, other activists argue that plastic bottles have a negative impact on the environment by being very difficult to dispose of.

Despite the opposition, the health benefits of packaged water (the term preferred by the World Health Organization) shouldn’t be ignored. WHO recognizes that some commercial mineral water products are actually a good source of essential nutrients like calcium, although there is little to no scientific evidence that can conclude that all bottled water products in world are healthy. At the very least, they are healthier than canned soda pop, which is constantly cited by various health groups and agencies as a major contributor to obesity.

For those who are having a difficult time switching from soda to drinking water, flavored drinking water can be considered as a marriage of both worlds. In fact, the aforementioned statistics for water consumption also include these new products since they didn’t undergo carbonation that would otherwise have classified them as soda. Catering to soda-lovers isn’t that difficult since investment in a liquid filler for manufacturing sodas can be repurposed to create flavored water instead.

It might take a while before soda completely phase out, although some soda companies are already adapting to the transition by producing non-soda products. Regardless of what happens to the demand for soda or bottled water, however, liquid filling machines in the US will continue to keep the beverage industry going.